Before we get into the nuts and bolts, as a general rule, if your semblance cannot be boiled down into two sentences that everyone can understand, it is too complicated. The staffer who works with you on your application and anybody you roleplay with in the future need to understand what your semblance does at a basic level without having to get an hour long explanation.

Each semblance will have a required summary that boils it down to what it does in mechanical terms like: 'Ruby's semblance, Speed, gives her a large increase to speed and allows her to fly as long as she does not stop moving while using it.' Short, easy to understand, and puts everyone on the same page. A detailed explanation comes later, of course, but if you can't boil your semblance down to one or two sentences then you do not have a refined concept.

An example of taking that easy to understand one sentence description and turning it into nonsense is thus: 'Ruby's semblance, Kinetic Energy, allows her to manipulate her anatomy to generate kinetic energy that propels her forward at a velocity that allows her to conduct aerial movement both laterally and vertically.' This is nonsense and means nothing to anyone. It's intentionally putting in vague language and terms that are either incorrect or can be said in a much more concise and easy to understand manner.

Semblances come in a few different forms in The Remnant Project, and a few of the types are below. This is not an attempt to list all different types of semblances, because generally speaking anything not on the banned list is acceptable or can be made acceptable. If that is not the case, it will be added onto the banned list.

Before we get into that, though, I want to point out three things.

First, it is important to note that semblances can and in some cases really should have some visual indicators of the semblance being used. Think Yang with her eye color change and glowing hair, it might not do anything mechanically but it both lets you really drive home a theme and make combats much more interactive with everyone in the area knowing damn well what's about to happen.

Second, as a general rule characters can only use their semblance when their aura is up and protecting their body. That means that when they are beat up enough to lower their aura to zero… they lose the ability to call upon their semblance. Overusing a semblance is exhausting, too, and while it can be trained like a muscle to get stronger and be more efficient that doesn't change the fact that using it consumes stamina, and once your aura is fully depleted it means that you can't rely on it anymore.

Third, as a general rule the only things that change about a semblance are damage and range unless otherwise specified. Damages and ranges per rank are noted here. Your semblance on rank-up does not do more things, it simply does the things that it initially did but better. Doing more things would be a combat ability, not a semblance upgrade.

With that out of the way, on to the types of semblances!

Manipulation semblances include anyone who can manipulate any form of matter including air, water, magnetism, ice, or anything else of that nature. It is important to note that these types of semblances can only manipulate one type of material, and can choose one of creation, solidification, or immunity to own semblance as a secondary perk. That means that someone who has a semblance to manipulate light would be able to take solidification in order to more easily weaponize their semblance, but could not create light and would not be immune to their own semblance.

In other words, you get manipulation of an element or substance as a baseline for picking this type of semblance. You also get to choose one of the three secondary perks listed below, but only one:

Clone semblances like Sun's, Blake's, Flynt's, and Neo's are another category I want to highlight. These are really finicky, so I want to put down some guidelines. There are two basic sets in this category – multiple clones and singular clones.

For multiple clone semblances: Exerting physical force, having enough durability to not be dispelled from one attack of any rank, the clone(s) having the ability to move, the user being propelled in any direction upon activation, and the ability for the user to do anything other than stand and control the clones are all mechanical benefits, and you are limited to three. Exerting physical force, clones having the ability to move, and having nonzero durability for example is basically Sun's semblance. He must stand still to manipulate his clones, however, which provides a key weakness because he cannot dodge with his actual body. Multiple clones drain aura more heavily than single clones do.

For single clone semblances: Exerting physical force, nonzero durability, clones and user being able to move while semblance is activated, clones exerting physical force only on the user with a free jump on activation, and the added option of having the clone being unable to be destroyed except with the shattering of the user’s aura entirely at the cost of all damage taken by the clone being rebounded into the user with no reduction whatsoever unless combined with the durability option. 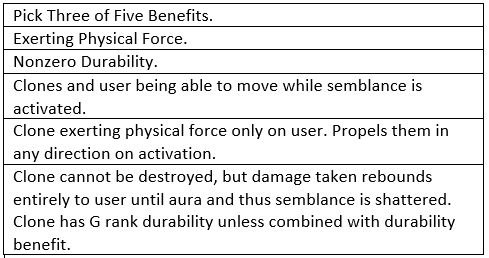 Physical Boost semblances work much like Ruby Rose's speed. Physical boosts do two things, and using Ruby's semblance in earlier volumes it gave her the ability to up her speed and also allow her to fly. Ren's semblance could be classified here as well on TRP, with his two boosts being making both himself and anyone he is in direct contact with completely undetectable by Grimm by completing blocking negative emotions from all parties. Making himself invisible to Grimm is the first benefit, and making people that he touches also invisible to Grimm is the second benefit. The important bit here is that there are two benefits, and that the ability is activated consciously and remains activated until 'turned off' somehow.

Passive semblances differ from the other types insofar as they do not need to be consciously activated. They are considered 'always-on' as long as the user has aura, and only provide one mechanical bonus. Trading reliability for power, essentially.

Transformation semblances are another one that I want to highlight. These are the biggest power up semblances in the system, and usually have some sort of activation requirement. If we were to do a non-perfect transfer of Yang's semblance, for example, she would need to take a certain amount of damage before activating three perks: Strength, Speed, and Stamina might be a good representation of what she can do. These semblances, unlike most other types, have a set duration and cooldown that is measured in posts due to the huge boost of power that they provide. Once activated, transformation type semblances cannot simply be 'shut off' at will.

1) Abilities that automatically hit or cannot be interacted with a la Emerald's mental hallucination semblance.

2) Abilities that grant perfect information or predict the future like retrocognition and precognition.

3) Abilities that grant immunities. (Durability is fine, but no character is fully immune to anything, except their own semblance in some cases.)

4) Space/Time manipulation including gravity, black holes, and teleportation like Raven's semblance of Portal Creation. To be clear, this also includes pocket dimensions and demi-planes a la Bag of Holding.

5) Semblances that steal or negate another person's aura.

6) Mind control of any form.

7) Weird body horror things and really anything else that breaks PG-13 rating.

9) Schnee glyphs in general. It's way too vague and does way too many things to even attempt to balance.

10) Abilities that can only function when your RP partners accept it. (Charisma and popularity, for example, are not abilities.)

11) Semblances that can either copy or nullify other people's semblances. (Counters are fine, I'm talking about someone who just turns off or mimics another person's semblance and calling that their own semblance.)

12) Abilities that create large numbers of copies or clones. Think a range of four being the upper end, not dozens or hundreds.

14) Semblances that directly buff other people's abilities with flat rank increases. This is extremely abuseable in systems like this, and it just turns into a bunch of people making characters with little to no agency by themselves to buff a singular person into godhood. Your character needs to have agency on their own and be able to defend themselves on their own to a certain extent.

15) Semblances that have Friend or Foe identification. What's banned is things like sound waves that affect the people that the user chooses despite others being in the area of effect. That is not allowed, and under TRP rules that sound would affect everyone capable of hearing within the area of effect. While it would be convenient to carpet bomb an area with your semblance and have it only effect enemies, friendly fire is in fact enabled on TRP.